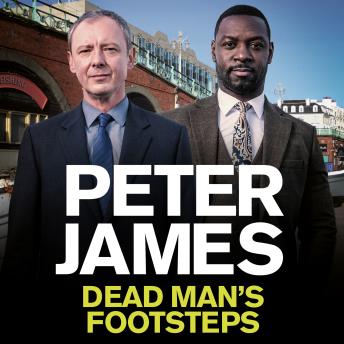 'Abby stepped in the lift and the doors closed with a sound like a shovel smoothing gravel. She breathed in the smell of someone else's perfume, and lemon-scented cleaning fluid. The lift jerked upwards a few inches. And now, too late to change her mind and get out, with the metal walls pressing in around her, they lunged sharply downwards. Abby was about to realize she had just made the worst mistake of her life . . .'
Amid the tragic unfolding mayhem of the morning of 9/11, failed Brighton never-do-well Ronnie Wilson sees the chance of a lifetime, to disappear and reinvent himself in another country. Five years later the discovery of the skeletal remains of a woman's body in a storm drain in Brighton, leads Detective Superintendent Roy Grace on an enquiry spanning the globe, and into a desperate race against time to save the life of a woman being hunted down like an animal in the streets and alleys of Brighton.
Dead Man's Footsteps is the fourth novel in the multi-million copy bestselling Roy Grace series, from number one author Peter James, read by actor Neil Perason.

This title is due for release on June 20, 2008
We'll send you an email as soon as it is available!