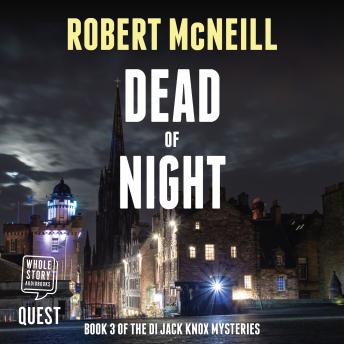 A French philanderer gets his comeuppance in Edinburgh, but which, if any, of his spurned lovers sealed his fate? DEAD OF NIGHT is the third book by Robert McNeill to feature Detective Inspector Jack Knox.

A lecturer is killed and dumped in the Union Canal. When DI Jack Knox investigates his past, he discovers a long list of old flames. Quite the lothario, the victim left several pining women and jealous husbands in his wake. There is no shortage of suspects. So, who put an end to the gigolo's antics? Meanwhile DS Mason, Jack Knox's fiancée and colleague, has problems of her own. Someone has vandalised her car and flat. She fears it is a disgruntled customer of Edinburgh's finest, looking for revenge. With these two cases, Knox is brought in front of his superiors following a complaint made against him. Will the top brass, once again, undermine the detective's efforts at catching the killer? Or can Knox cut through the misinformation and bring them to justice?