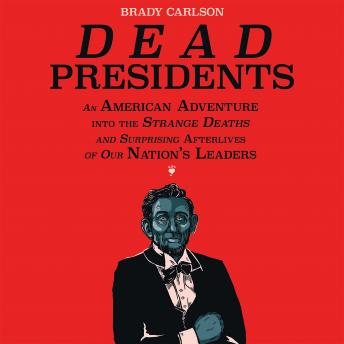 Dead Presidents: An American Adventure into the Strange Deaths and Surprising Afterlives of Our Nation's Leaders

An entertaining exploration into the varied ways we remember and memorialize the American presidents. In Dead Presidents, NPR host Brady Carlson takes readers to presidential gravesites, monuments, and memorials to tell the death stories of our greatest leaders. Mixing biography and travelogue, Carlson explores whether William Henry Harrison really died of a cold, why Zachary Taylor's remains were exhumed 140 years after his death, and how what killed James A. Garfield wasn't an assassin's bullet. He tells the surprising stories of the Washington Monument, Mount Rushmore, and Grant's Tomb. And he explains why “Hooverball” is still played in Iowa, why Millard Fillmore's final resting place is beside that of funk legend Rick James, and why Ohio and Alaska continue to battle over the name of Mt. McKinley. With an eye for neglected places and offbeat people reminiscent of Tony Horwitz and Sarah Vowell, Carlson shows that the ways we memorialize our presidents reveal as much about us as about the men themselves