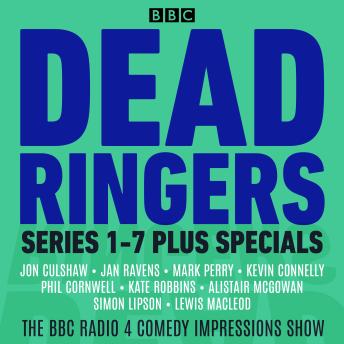 Wickedly funny and bitingly satirical, Dead Ringers has been lampooning politicans, celebrities and media pundits for over 20 years. In these seven series, first broadcast between 2000 and 2002, the team give us their peerless impressions of the personalities we love to laugh at: from Tony Blair and George W. Bush to Brian Sewell, Posh n' Becks and Kirsty Wark.

In their surreal alternate universe, Jack Nicholson joins the cast of Last of the Summer Wine, Alan Bennett and Thora Hird reveal their dark sides over a pot of Earl Grey, and a desperate Doctor calls directory enquiries in search of his arch-enemy, The Master. Plus, Hamlet receives the classic sitcom treatment, Anne Robinson puts her family through its paces to find The Weakest Child - and there's horror at the Simon Bates Hotel...

Also included are The Archers Special, which celebrates the 50th anniversary of the much-loved soap opera; the 2001 Election Special; and the 2002 Golden Jubilee Special, in which the impressionists take a right royal look back over 50 years of British cultural life.

NB: Contains humour and language that some listeners may find offensive

This title is due for release on February 23, 2023
We'll send you an email as soon as it is available!