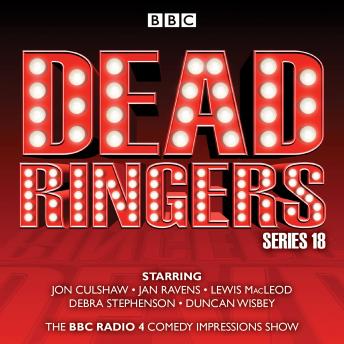 In the six shows from Series 18, ‘Brexit Bulldog’ David Davis decides to go back in time to 1973 and prevent Britain from joining the EEC in the first place, Joan Bakewell explains Love Island to Radio 4 listeners, and we hear the team’s unique take on the summit between Kim Jong-un and Donald Trump. There’s also a guide to the World Cup for those who hear ‘And now Gary with the sport’ and think it's a cue to go and brush their teeth; and an exploration into how Britain is coping with an onslaught of good sporting news and relentlessly pleasant weather.

Guest starring Sanjeev Bhaskar as extraterrestrial Geoff, the 45-minute special An Alien Has Landed sees Dead Ringers looking back one year after Geoff’s spaceship arrived on Earth, and examining his integration into British life, his meteoric rise and his spectacular fall from grace. Among the talking heads are Brian Cox, Louis Theroux – and Thora Hird.