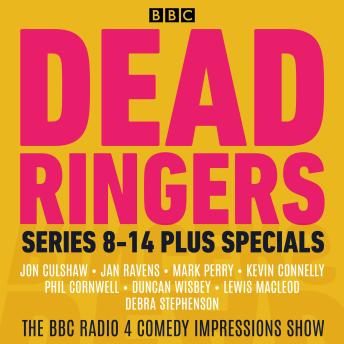 Since the turn of the millennium, Dead Ringers has been giving us its skewed, hilarious take on the famous and the infamous. The show has won a British Comedy Award, a Sony Gold Award, and a Press Guild Award for Radio Programme of the Year - and won a legion of fans with its merciless parodies, mocking every programme, institution and politician you hold dear.

Satire meets silliness in these seven series, as the gravelly-voiced Doctor inquires about interstellar travel on the London Eye, Scooby Doo and the gang enter the terrifying London Congestion Zone, and Stephen Fry presents a BAFTA tribute to someone - but he's not entirely sure who... Elsewhere, some familiar voices phone up the European Space Agency, the team add a bit of festive cheer to Crimewatch and Embarrassing Bodies, and Mel and Sue give their double entendres a good old squeeze in The Great British Innuendo.

Also featured is a sparkling selection of unbroadcast material from the razor-sharp BBC Radio 4 comedy.

NB: Contains humour and language that some listeners may find offensive

This title is due for release on February 23, 2023
We'll send you an email as soon as it is available!