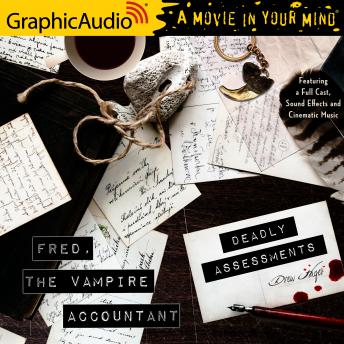 'After several years as a vampire, starting a business, founding his own clan, and proposing to his girlfriend, Fred is finally beginning to settle into life as an undead accountant. Unfortunately, not everyone is happy about his continued survival, or the dangerous friends he's made along the way. The Blood Council has dispatched a representative to determine if Fred is fit for the position he currently fills as head of a clan, and the stakes for failure are deathly serious. Worse, Fred will have to muddle through without the help of Krystal, who is off on a mysterious task of her own. Saddled with a new bodyguard, Fred will have to prove he's got what it takes to be a respectable vampire, control his abilities, and lead a clan. Because if he can't, the House of Fred will be no more. Performed by Christopher Walker, Eva Wilhelm, Nora Achrati, Yasmin Tuazon, Danny Gavigan, Alejandro Ruiz, Carolyn Kashner, Shanta Parasuraman, Zeke Alton, Karen Novack, Marni Penning, Ken Jackson, Eric Messner, Scott McCormick, Rose Elizabeth Supan, Mort Shelby, Elizabeth Jernigan, Lydia Kraniotis, Michael John Casey, Bradley Smith, Terence Aselford, Chris Davenport, and Colleen Delany.'