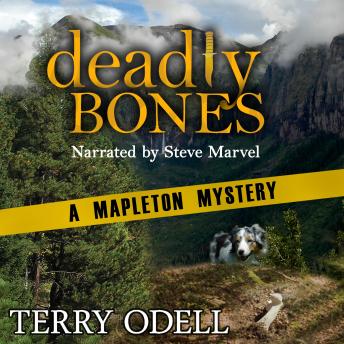 A dog finding a bone is no big deal—until it turns out to be human.

Mapleton Police Chief Gordon Hepler and the mayor can’t agree about what being a cop means. To Gordon, it’s keeping his citizens safe. To the mayor, it’s generating revenue by issuing speeding and parking tickets.

When two runaway dogs waylay Gordon on the way to what he hopes will be an uneventful afternoon at a backyard barbeque, more than his afternoon is interrupted. As dogs will do, these have uncovered a bone. Trouble is, it turns out to be human. When it leads to the discovery of more human remains, Gordon needs to find out why they’re on the property, when they got there, and who they belonged to. After all, somebody needs to care.

Over the mayor’s objections, Gordon pursues the investigation of the bones along with an unusual outbreak of petty crimes, accidents, and a dispatcher who seems to be losing it. Before long, he’s got more puzzle pieces than he knows what to do with—and no puzzle to fit them into. When people he loves are endangered, no mayoral directive will stop Gordon from saving them.

This second book in the Mapleton Mystery series reunites Gordon with Detective Tyler Colfax, once again faced with cooperating to solve another case.

This title is due for release on December 3, 2016
We'll send you an email as soon as it is available!