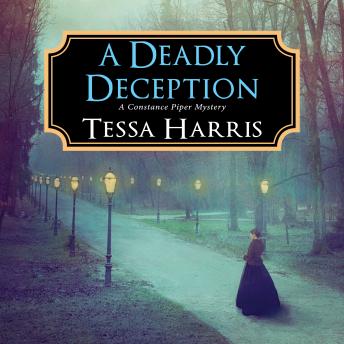 London, July 1889. Eight months have passed since the horrific murder of Mary Jane Kelly. The residents of Whitechapel have begun breathing easy again-daring to leave windows open and walk about at twilight. But when old Alice McKenzie is found dead, throat slashed from ear to ear, the whispers begin once more: Jack the Ripper is back.

Constance Piper, a flower seller with a psychic gift, was a friend to both women. With the supernatural help of her late mentor, Miss Emily Tindall, and her more grounded ally, police detective Thaddeus Hawkins, she uncovers links between the murders and a Fenian gang. The Fenians, committed to violence to further their goal of an independent Ireland, are also implicated in a vicious attack in which the Countess of Kildane's uncle was killed. Could the Whitechapel murders be a ruse to make the British police look helpless?

Soon, Constance is called upon for help. But there are spies everywhere in the city, and a bomb plot intended to incur devastating carnage. And as Constance is fast discovering, the greatest evil may not lurk in the grimy alleys of the East End, but in a conspiracy that runs from Whitechapel to the highest office in the land . . .