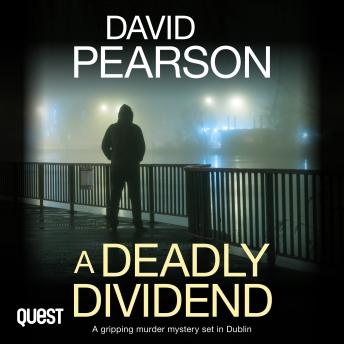 A promising young banker is killed in a Dublin alleyway. Two very different detectives try to find the murderer. A DEADLY DIVIDEND is the first book in a new series of murder mysteries by best-selling author David Pearson, whose other Irish crime fiction has topped the charts.

A night out turns into a nightmare for a young man who is killed in Dublin's city centre. Once a street brawl or mugging is ruled out, it begins to look like he was targeted. But why? DI Aidan Burke struggles to get anything useful out of the man's friends and family, so the investigation leads to his workplace. It is here that they establish he was in a relationship with a co-worker. And when his girlfriend is attacked in her home and narrowly escapes with her life, detectives become certain the death was not random. The inquiry meets a brick wall of financial secrecy. To no avail, DI Burke tries unconventional methods to break it. Could the softer touch of his sergeant, the unassuming DS Fiona Moore, provide the key?

This title is due for release on March 18, 2021
We'll send you an email as soon as it is available!