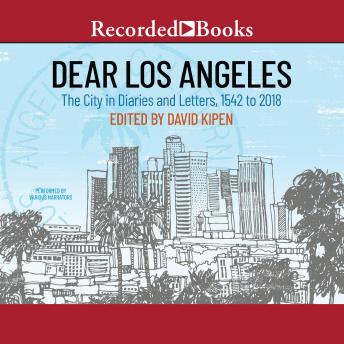 A rich mosaic of diary entries and letters from Marilyn Monroe, Cesar Chavez, Susan Sontag, Albert Einstein, and many more, this is the story of Los Angeles as told by locals, transplants, and some just passing through. The City of Angels has played a distinct role in the hearts, minds, and imaginations of millions of people, who see it as the ultimate symbol of the American Dream. David Kipen, a cultural historian and avid scholar of Los Angeles, has scoured libraries, archives, and private estates to assemble a kaleidoscopic view of a truly unique city. From the Spanish missionary expeditions in the early 1500s to the Golden Age of Hollywood to the strange new world of social media, this collection is a slice of life in L.A. through the years. The pieces are arranged by date-January 1st to December 31st-featuring selections from different decades and centuries. What emerges is a vivid tapestry of insights, personal discoveries, and wry observations that together distill the essence of the city. As sprawling and magical as the city itself, Dear Los Angeles is a fascinating, must-have collection for everyone in, from, or touched by Southern California. With excerpts from the writing of Ray Bradbury - Edgar Rice Burroughs - Octavia E. Butler - Italo Calvino - Winston Churchill - Noel Coward - Simone De Beauvoir - James Dean - T. S. Eliot - William Faulkner - Lawrence Ferlinghetti - Richard Feynman - F. Scott Fitzgerald - Allen Ginsberg - Dashiell Hammett - Charlton Heston - Zora Neale Hurston - Christopher Isherwood - John Lennon - H. L. Mencken - Anais Nin - Sylvia Plath - Ronald Reagan - Joan Rivers - James Thurber - Dalton Trumbo - Evelyn Waugh - Tennessee Williams - P. G. Wodehouse - and many more Advance praise for Dear Los Angeles 'This book's a brilliant constellation, spread out over a few centuries and five thousand square miles. Each tiny entry pins the reality of the great unreal city of Angels to a moment in human time-moments enthralled, appalled, jubilant, suffering, gossiping or bragging-and it turns out, there's no better way to paint a picture of the place.'-Jonathan Lethem '[A] scintillating collection of letters and diary entries . . . an engrossing trove of colorful, witty insights.'-Publishers Weekly (starred review)