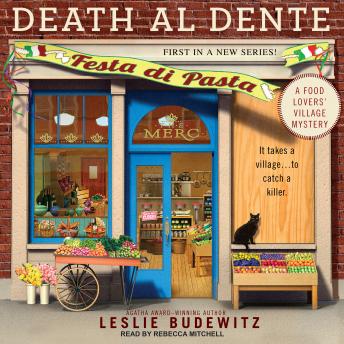 The town of Jewel Bay, Montana-known as a Food Lovers' Village-is obsessed with homegrown and homemade Montana fare. So when Erin Murphy takes over her family's century-old general store, she turns it into a boutique market filled with local delicacies. But Erin's freshly booming business might go rotten when a former employee turns up dead . . .

Murphy's Mercantile, known as the Merc, has been a staple in Jewel Bay for over a hundred years. To celebrate their recent makeover as a gourmet food market, Erin has organized a town festival, Festa di Pasta, featuring the culinary goods of Jewel Bay's finest-including her mother Fresca's delicious Italian specialties.

But Erin's sweet success is soured when the shop's former manager, Claudette, is found dead behind the Merc on the Festa's opening night. With rival chef James Angelo stirring up rumors that Fresca's sauce recipes were stolen from Claudette, Erin's mother is under close scrutiny. Now Erin will have to hunt down some new suspects, or both her family and her store might wind up in hot water . . .