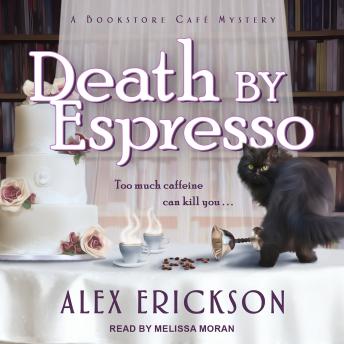 Bookstore-cafe owner Krissy Hancock has plenty to keep her occupied outside business hours, like preparing for her best friend's wedding and solving a murder . . .

Krissy is meeting Vicki's parents at the Pine Hills, Ohio, airport-it's the least she can do as maid of honor, even if her relationship with Mr. and Mrs. Patterson is a bit strained. Besides, her own dad is coming in on the same flight. But there are a few additional arrivals, too. Her father's brought a date-and the Pattersons, both actors, seem to have an entire entourage trailing behind them.

Uninvited guests are a headache-especially when one turns out to be, allegedly at least, the most important wedding planner in all the world. Though Vicki and Krissy have already made arrangements for a small, simple party, Vicki's snobby drama queen mother has her own ideas. Cathy the wedding planner is raring to go, possibly energized by the chocolate-covered espresso beans she compulsively munches. But while the caffeine keeps her awake, it doesn't keep her alive-and after Cathy chokes on an espresso bean after being hit in the head, Krissy has to find out who ended her supposedly stellar career . . .