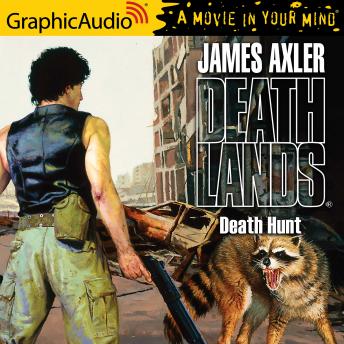 The treacherous new world of post-nuclear America guarantees no inalienable rights-no promises of freedom, liberty or justice for all. Instead, chaos and blood lust thrive-but so do the innate strengths of the human spirit and the virtues of honor and courage. Ryan Cawdor has endured the worst that Deathlands has to offer and continues to push on, leading his companions through a land of madness and treachery, seizing each new day with a deep, primal hope that refuses to die... Ryan's razor-sharp edge has been dulled by the loss of his son, Dean-but grief is an emotion he cannon indulge if the band is to escape the chains of sadistic Baron Ethan. His thriving ville offers a special commodity: blood sport. Now with the group's armorer, JB Dix, imprisoned and near death, Ryan and the others are forced to join Ethan's hunt-as the hunted. But the perverse and powerful baron has changed the rules. Skilled in mind control, he ensures the warriors will not be tracked by high-paying thrill seekers. Instead, they will hunt each other-to the death. In the Deathlands, the odds of survival just got worse...