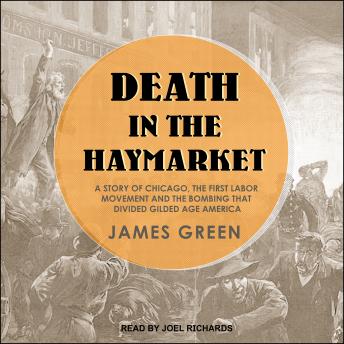 Death in the Haymarket: A Story of Chicago, the First Labor Movement and the Bombing that Divided Gilded Age America

On May 4, 1886, a bomb exploded at a Chicago labor rally, wounding dozens of policemen, seven of whom eventually died. A wave of mass hysteria swept the country, leading to a sensational trial, that culminated in four controversial executions, and dealt a blow to the labor movement from which it would take decades to recover.

Historian James Green recounts the rise of the first great labor movement in the wake of the Civil War and brings to life an epic twenty-year struggle for the eight-hour workday. Blending a gripping narrative, outsized characters, and a panoramic portrait of a major social movement, Death in the Haymarket is an important addition to the history of American capitalism and a moving story about the class tensions at the heart of Gilded Age America.

Death in the Haymarket: A Story of Chicago, the First Labor Movement and the Bombing that Divided Gilded Age America