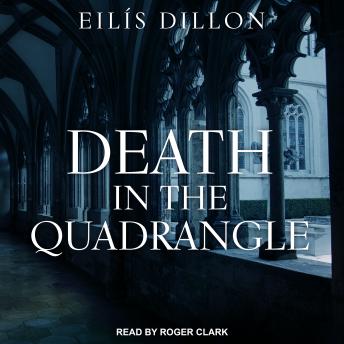 Death in the Quadrangle

Since his retirement from King's University, life has been rather quiet for Professor Daly . . .

In fact, a peaceful retirement, even when that retirement has been punctuated by helping the police to solve the odd crime, may be slightly over-rated: at least in Daly's opinion. So when he is invited back to King's University to deliver a series of prestigious lectures, his heart leaps. But on arrival he discovers that he has not been called back to the university on account of his literary knowledge . . .

On the contrary, he has been called upon purely because the retired professor has experience of solving crime. And somebody has been sending the president of King's threatening letters. Somebody within the university, it seems, wants him dead. Perhaps aware of his own arrogant, materialistic and bullying nature and the effects it may produce, President Bradley seems genuinely worried for his safety.

And so Daly, assisted by Inspector Mike Kenny, sets about finding the author of the poison pen letters.

At which point, Daly and Kenny find themselves seeking a murderer among the university's population.