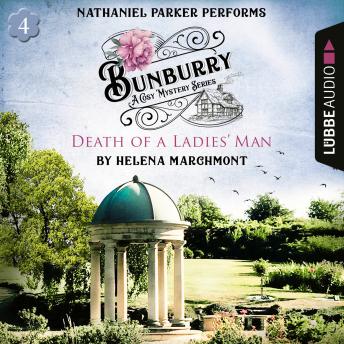 Miss Marple meets Oscar Wilde in this new series of cosy mysteries set in the picturesque Cotswolds village of Bunburry. In 'Death of a Ladies' Man,' the fourth Bunburry book, the summer tourist season is in full swing. Among the visitors is Mario Bellini, a gelateria owner with film-star good looks, who is considering opening an ice-cream parlour in Bunburry. But shortly after his arrival, he is found dead - a tragic accident, or something more sinister? Amateur sleuth Alfie McAlister hopes to uncover the truth with the help of his friends Liz and Marge. But is Liz too distracted by the prospect of financial gain to focus on the task at hand? Nathaniel Parker, born in 1962, graduated from the London Academy of Music and Dramatic Art and went on to join the Royal Shakespeare Company. His television career began in 1988 when he played Flying Officer 'Flash' Gordon in the LWT mini-series Piece of Cake. He is also the lead in the BBC series Inspector Lynley Mysteries, based on the novels by Elizabeth George. Nathaniel Parker has an extensive list of audio books to his credit, ranging from the classics of Charles Dickens and Thomas Hardy to more modern writings and children's books.