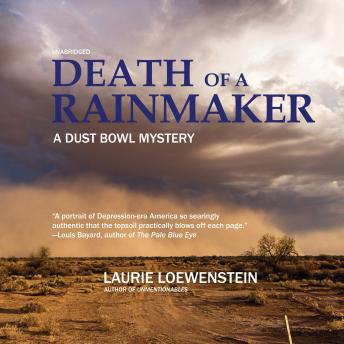 Death of a Rainmaker: A Dust Bowl Mystery

When a rainmaker is bludgeoned to death in the pitch-blackness of a colossal dust storm, small-town sheriff Temple Jennings shoulders yet another burden in the hard times of the 1930s Dust Bowl. The killing only magnifies Temple's ongoing troubles: a formidable opponent in the upcoming election, the repugnant burden of enforcing farm foreclosures, and his wife's lingering grief over the loss of their eight-year-old son.
As the sheriff and his young deputy investigate the murder, their suspicions focus on a teenager, Carmine, serving with the Civilian Conservation Corps. The deputy, himself a former CCCer, struggles with remaining loyal to the corps while pursuing his own aspirations as a lawman.
When the investigation closes in on Carmine, Temple's wife, Etha, quickly becomes convinced of his innocence and sets out to prove it. But Etha's own probe soon reveals a darker web of secrets, which imperil Temple's chances of reelection and cause the husband and wife to confront their long-standing differences about the nature of grief.

Death of a Rainmaker: A Dust Bowl Mystery