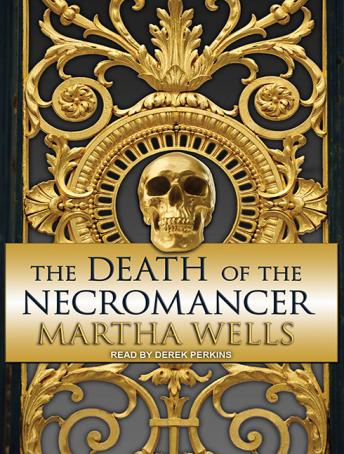 The Death of the Necromancer

Nicholas Valiarde is a passionate, embittered nobleman with an enigmatic past. Consumed by thoughts of vengeance, he is consoled only by thoughts of the beautiful, dangerous Madeline. He is also the greatest thief in all of Ile-Rien . . .

On the gaslight streets of the city, Nicholas assumes the guise of a master criminal, stealing jewels from wealthy nobles to finance his quest for vengeance: the murder of Count Montesq. Montesq orchestrated the wrongful execution of Nicholas's beloved godfather on false charges of necromancy-the art of divination through communion with spirits of the dead-a practice long outlawed in the kingdom of Ile-Rien.

But now Nicholas's murderous mission is being interrupted by a series of eerie, unexplainable, even fatal events. Someone with tremendous magical powers is opposing him. Children vanish, corpses assume the visage of real people, mortal spells are cast, and traces of necromantic power that hasn't been used for centuries are found. And when a spiritualist unwittingly leads Nicholas to a decrepit mansion, the monstrous nature of his peril finally emerges in harrowing detail. Nicholas and his compatriots must destroy an ancient and awesome evil. Even the help of Ile-Rien's greatest sorcerer may not be enough, for Nicholas faces a woefully mismatched battle-and unthinkable horrors await the loser.

An intriguing story only Ms. Wells could conjure into a reality. After listening to her previous novels about future dilemmas...this had me taken aback a little. Her mastery of words has you hanging on! Well done Martha Wells.

This standalone book is the best in the Ile-Rien series - definitely outranking The Wizard Hunters for mystery, intrigue, plot development, and narration. This tale is an interesting twist of historical magical realism and a good, old fashioned, Lovecraft-like horror - with a dash of Oceans Eleven and Sherlock Holmes thrown in for good measure - and none of these so heavy as to be depressing or entirely disturbing. It reads a little like a murder mystery thriller - which also means there isn't much for character development. But the characters are interesting, some of them even likable and a scoche endearing. All in all, a good read. Rated PG13 for adult themes concerning the aftermath of serial killing/torture/necromancy (never described actively), murder and violence (described actively but not in detail/at length), perilous situations, organized crime, seance-like events (WITHOUT religious or demonic overtones), reanimation of dead monsters, human-like and otherwise, examination of dead bodies and crime scenes.