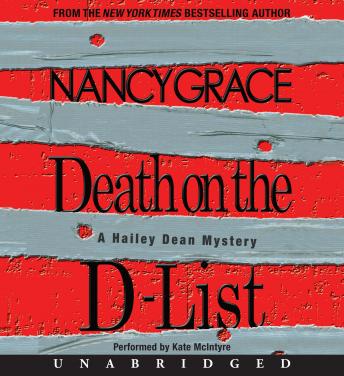 Death on the D-List

The brutal slayings of a string of her patients in New York and a horrific attempt on her own life leave Hailey Dean down, but not defeated. After a yearlong respite back home in the Southland, former violent crimes prosecutor Hailey Dean finally returns to her apartment in the sky overlooking Manhattan. Hailey’s determined to rebuild a normal life and settle back into her growing practice as a therapist. But in a twist of fate, Hailey agrees to follow her heart and fight crime once again, this time in a new arena, in front of a camera! Under the hot lights of a TV studio, Hailey learns the TV industry’s not so glamorous. In fact, it’s downright deadly!

Waning celebrities, all stunning actresses, each one a shining star turned has-been now struggling to get off the D-List and back into the limelight, meet with a bloody stage exit . . . murder! Hailey’s archenemy, Lieutenant Ethan Kolker, the NYPD cop who hunted Hailey down for the murders of her own patients, now wants the past forgotten and reaches out for Hailey’s help to solve the murders. In a race against the clock, Hailey has no idea that TV can be murder!

In best-selling author, attorney, and TV personality Nancy Grace’s second Hailey Dean thriller, life on television is no less dangerous than life in the courtroom!

Death on the D-List