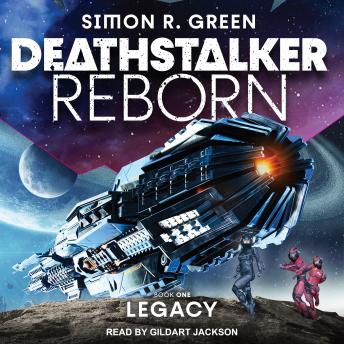 Owen Deathstalker sacrificed everything to topple a corrupt empire and usher humanity into an age of peace and prosperity. Now Lewis Deathstalker, Owen's descendant, carries on the family name and honor as a Paragon, warriors famed for their skill and heroism who dispense the king's justice throughout the galaxy.

However, two hundred years have passed since Owen and his gang of heroes disappeared into legend, and the peace that the Deathstalker bought with his life is quickly coming to an end. Amidst political uncertainty, Lewis's oldest friend, Douglas, ascends the throne and names Lewis to the archaic, and largely symbolic, role of King's Champion. But Lewis quickly finds that he has all the bad luck of his famous ancestor and that his old allies have become his enemies.

Surrounded on all sides by plots and treason with the political situation spiraling out of control, Lewis is exiled from court in disgrace. Now it's the new Deathstalker's turn to save the empire with only a ragged band of allies as chaos spreads throughout the empire and threatens to end the golden age.