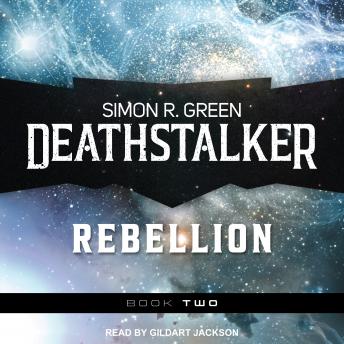 Deathstalker Rebellion: Being the Second Part of the Life and Times of Owen Deathstalker

Owen Deathstalker-outlawed, with a price on his head and the blood of a mighty warrior lineage in his veins-had no choice but to embrace a dangerous destiny. With nothing to lose, only he had the courage to take up arms against Queen Lionstone XIV.

Now as he gathers his unlikely allies-the legendary washed-up hero Jack Random, the beautiful pirate Hazel d'Arc, the original Deathstalker long since presumed dead, and the alien Hadenmen whose purposes no human can discern-the eyes of the downtrodden are upon him while the freedom of a galaxy hangs in the balance . . .

Deathstalker Rebellion: Being the Second Part of the Life and Times of Owen Deathstalker