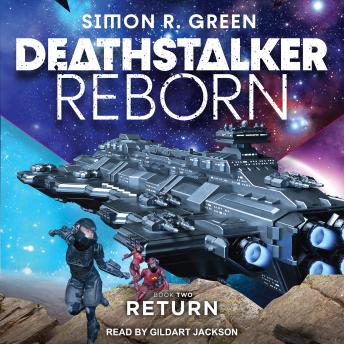 Take a journey through the Age of Heroes . . .

After falling in love with the king's intended, Lewis Deathstalker is now exiled, an outlaw from the empire he faithfully served for so long. With Lewis out of the way, former Paragon Finn Durandal has led a silent coup to wrest control from the king and set himself up as the power behind the throne.

But Durandal is not the Empire's biggest threat. The Terror that Owen Deathstalker prophesied nearly 200 years ago is almost upon them, and Owen is supposedly the only one who can save civilization from unspeakable horrors. Lewis, unwilling to believe that the galaxy's savior is dead, sets off to the darkest reaches of the Galaxy to find his lost ancestor.

Lewis intends to retrace Owen's footsteps and overturn every possible lead. But with Finn in control of the empire's massive forces, he is outmanned and outgunned at every turn. Lewis must stay one step ahead of Finn's ever-expanding reach if he has any hope of discovering Owen's fate.