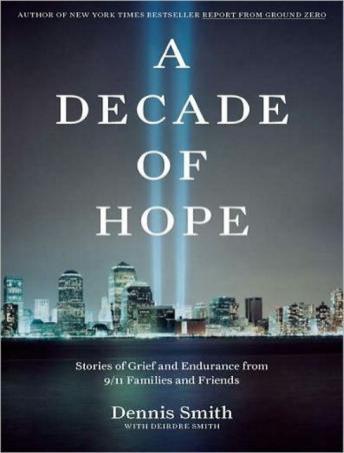 A Decade of Hope: Stories of Grief and Endurance from 9/11 Families and Friends

This year marks the tenth anniversary of the attacks on the World Trade Center and the Pentagon, an occasion that is sure to be observed around the world. But among the memorials, political speeches, and news editorials, the most pressing consideration-and often the most overlooked-is the lives and well-being of the 9/11 first responders, their families, and the victims' families over the past decade.

Dennis Smith, a former firefighter and the author of the bestselling Report from Ground Zero, addresses this important topic in a series of interviews with the heroes and families of those most affected by the tragedy either through feats of bravery in the rescue efforts or heroic bearing up in the face of unimaginable loss. Smith provides an intimate look at a terrible moment in history and its challenging and difficult aftermath, allowing these survivors to share their stories of loss, endurance, and resilience in their own words. A Decade of Hope is an honest and vitally important look at a decade in the lives of those for whom a national tragedy was a devastatingly personal ordeal.

Decade of Hope: Stories of Grief and Endurance from 9/11 Families and Friends