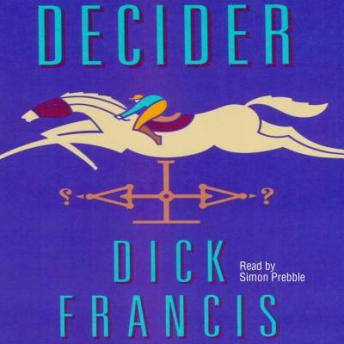 THE STAKES ARE DEADLY AT STRATTON PARK

Architect and family man Lee Morris never gave much thought to the shares he inherited of the Stratton Park racecourse, the multi-million dollar property owned by the powerful Stratton family. His mother had first received the shares to keep her quiet about the abuse she had suffered at the hands of her first husband, Keith Stratton. Now, much to Lee's chagrin, he is being drawn into the thick of the Stratton family squabbles as they wage a furious debate over the future of the race track.

So when Lee packs his six sons into his renovated old bus to visit the racetrack, he finds himself embroiled in a supremely dangerous game that extends much deeper than horse racing. And perhaps too late, Lee realizes his involvement in the racetrack may cost him more than he bargained for...It may cost him his life...