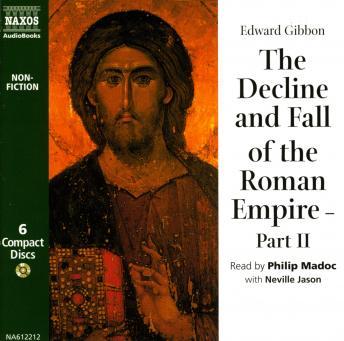 The Decline and Fall of the Roman Empire, Part 2

Edward Gibbon's Decline and Fall of the Roman Empire occupies an immortal place in the pantheon of historical masterpieces. This six-disc recording covers the final three volumes of Gibbon's work, tracing ten centuries in the life of the eastern half of the empire, whose capital city was Constantinople. Among the many figures who stride across Gibbon's stage here are the emperor Justinian I, a noble statesman and successful warrior, brought low by his lascivious wife, the former prostitute Theodora; the murdering Basil I, a peasant who nonetheless proved himself a worthy figure upon which to drape the purple; and the final emperor of all, Constantine XI, who died on the battlements of Constantinople in 1453, valiantly fighting a losing battle to prevent the Turks from gaining a city they had craved for centuries. It is still the work that sets the standard for all histories of the period.

Decline and Fall of the Roman Empire, Part 2

This title is due for release on May 13, 1997
We'll send you an email as soon as it is available!