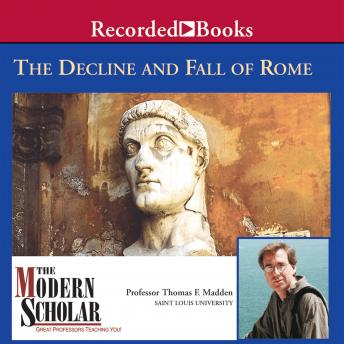 Decline and Fall of the Roman Empire

Even millennia after its fall, the grand expanse of Roman achievement continues to affect not only American society, but the entire world as well. What caused a civilization of such accomplishments to disintegrate? In this informative and lively series of lectures, renowned history professor Thomas F. Madden serves as the ultimate guide through the fall of ancient Rome. Professor Madden correlates the principles of Roman conduct-both governmental and military- that would forever change the world. Rome was an empire unlike the world had ever seen, and one that will likely never be duplicated. Peopled with personages of great distinction and even greater ambition, at once notable for humanity's great promise and flawed nature, the Roman Empire contributed many of history's proudest advancements. Here Professor Madden invites audiences to explore all the grandeur of this lost empire.

Decline and Fall of the Roman Empire