The Decline of the Soviet Unionr: The History of the Communist Empire in the Last 30 Years of Its Existence 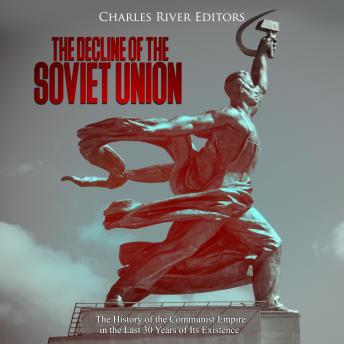 Leonid Brezhnev became First Secretary of the Communist Party in the Soviet Union in late 1964 after a plot to oust Khrushchev. Little is remembered in the public imagination about Brezhnev in comparison to Mikhail Gorbachev, Vladimir Lenin, or Joseph Stalin, despite the fact Brezhnev ruled the USSR from 1964-1982, longer than any Soviet leader other than Stalin. In fact, he held power during a tumultuous era that changed the world in remarkable ways, and that era has been favorably remembered by many former Soviet citizens. It marked a period of relative calm and even prosperity after the destruction of World War II and the tensions brought about by Khrushchev. Foremost amongst Brezhnev's achievements would be the détente period in the early 1970s, when the Soviets and Americans came to a number of agreements that reduced Cold War pressures and the alarming threat of nuclear war.
The Cold War moved into one of its most dangerous phases after Brezhnev's death as both sides deployed nuclear weapons within alarming proximity in Europe. A NATO exercise, "Operation Able Archer," almost led to a Soviet miscalculation, and when the Soviets shot down a South Korean airliner in September 1983, claiming it had strayed into Soviet airspace, the Cold War became very tense indeed.  After going through three elderly leaders in three years, Mikhail Gorbachev was chosen as the new General Secretary at the relatively youg age of 54 in March 1985. Gorbachev hoped to build the Soviet economy to relieve the persistent shortages of consumer goods it faced, which were caused by enormous military spending of the Soviet Union. Gorbachev tried to introduce some economic reforms, but they were blocked by communist hardliners. Gorbachev then came to the belief that the Soviet economy could not improved without political reform as well.

Decline of the Soviet Unionr: The History of the Communist Empire in the Last 30 Years of Its Existence