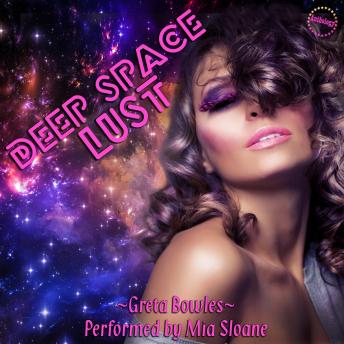 A diplomatic mission, smuggling runs, dodgy trade runs, and working on board a space freighter—all simple, if adventurous pursuits. But when they take place in deep space, when the officials you meet, and the bad guys you encounter are aliens, the challenges can get hairier, and sexier fast.
In these four erotic tales of adventure in space, four quite different women pilot spacecraft, avoid interplanetary police, fight off pirates, and work with alien armies to resolve planetary conflicts.
It’s all about going with the flow.
~~~~~ PG Excerpt ~~~~~
“Your leader should come with us.”
I'd stuck my head out of the doorway of our spaceship to get the lay of the land and found him standing there, waiting. Four other men stood behind him. Having said his piece, the tall man stared at me. I think he was trying to decide if I understood him. His concern was reasonable, seeing as we'd just arrived on his planet in a spaceship.
“Hold on a sec,” I said.
We'd swallowed our biotranslators before landing and they were assimilating into our systems. They'd make us conversant in the local languages for a week before digestion returned them to basic proteins.
Pic and I had military issue units that lacked the nuance algorithms and speaking slang could come out weird. The Foreign Planet Service people got the good ones. Ours gave us the gist of general conversation pretty well when the units didn't crap out, but we didn't always get the full picture.
“I am the Ambassador, “Jenna told him, stepping forward to face him.” I am the leader of this mission and represent the governments of the Commerce Union. These are my escorts and must attend me.”
I have to admit that Jenna had the moves down. She held her chin up and had her shoulders pulled back as she stepped ahead of us. It was all intended to seem imperious. To me, it just looked silly. Her people were squarely built, rather hairy and anything but regal.