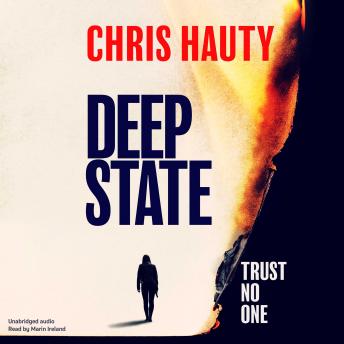 Deep State: The most addictive thriller of the decade

'Full of twists, this one will keep you hooked to the very end' JAMES SWALLOW

The warning is loud and clear. Shortly after uttering it, the White House Chief of Staff is found dead in his home. It’s ruled as a heart attack. Only his intern, former soldier Hayley Chill, knows something is not right.

Starting her own investigation, Hayley uncovers a secret organisation buried in the furthest reaches of government.

THE DEEP STATE – noun
A covert state hidden within a government;
a secret organisation of high-level operatives;
exerts control through manipulation and a culture of pain and fear.

When she discovers the plot to assassinate the president, they realise someone is on to them. How long will it be until they know that it’s her?

Infiltrate.
Trust no one.
Kill – or be killed.

Fans of series like The Bodyguard and Designated Survivor, or books by of James Swallow, Terry Hayes, Gregg Hurwitz and Rob Sinclair will love this stunning debut. With twists you won’t see coming, this thriller is a true page-turner.

PRAISE FOR DEEP STATE
'The ending is a jaw-dropper'
'This is going to be THE book for 2020'
'The definition of a great political thriller’
‘A gripping tale of political skulduggery that is deeper than it initially appears’ THE TIMES
‘Brilliantly fast-moving and absorbing… the twists just keep coming’ SUNDAY TIMES CRIME CLUB
'It’s unique, fresh and the word ‘twist’ is just not acceptable to cover what happens… SUPERB! 10/10'
'This one had great twists and turns. When I thought we were headed in one direction, it would veer off into another and I loved it'

Brilliant. Loved the twist at the end! It will make a great movie.

I liked the book and the narration. It’s well written and the ending surprising. Well worth the reed.