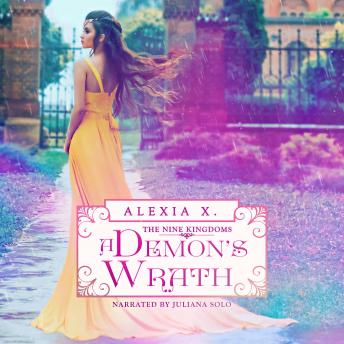 When the formidable warrior Drake McNamara discovers his precious Pearl of Life, a powerful treasure that has the ability to cure any poison, gone missing along with Cecelia van Zandt, the spirited young woman he saved from a cruel death—he unleashes his demonic wrath by taking Cecelia as his prized prisoner and promises her a dark, rapturous torment.

In order to save her mother’s life from a deadly poison, spirited Cecelia Van Zandt must retrieve the Pearl of Life, a powerful treasure that belongs to the fearsome demon king Drake McNamara. After begging her uncle for help to no avail and against her mother’s wishes, Cecelia disguises herself as a lad and leaves the safety of the palace to find the item that resides in the depths of the dangerous Demon Kingdom. When Drake saves her from impending death, she finds she is strangely attracted to him and beguilingly loses herself in his hot seduction.

The formidable warrior Drake McNamara must save his nephew from the cruel human’s hands that cunningly kidnapped the boy. After a powerful vision, he and his comrades rescue his nephew and a young lad named Brian. Drake suspects Brian, who is in actual fact Cecelia, has a hidden agenda. When he finds her missing, along with his Pearl of Life, he unleashes his demonic wrath by raiding Dardania Kingdom, takes Cecelia as his prized prisoner, and promises her a dark, rapturous torment she richly deserves.