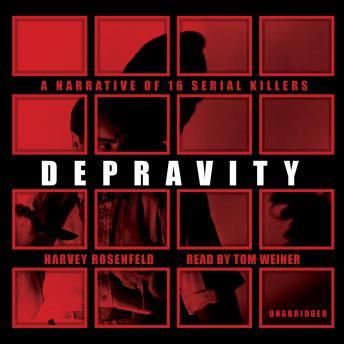 Depravity: A Narrative of 16 Serial Killers

Their crimes span the globe, but one thing unites them: they are sixteen of the twentieth century's most notorious serial killers.
In this well-researched volume, discover their motives and what made them tick. Walk the path of the investigators who broke their cases and listen to the killers' own words.
All of them made their communities tremble in fear. They include:
-Johann Otto Hoch, who moved to America from Germany in the 1890s and married a string of women. Instead of being the man of their dreams, he became their worst nightmare.
-Fritz Haarmann, "The Vampire of Hanover," who killed dozens of young male vagrants and prostitutes from 1919 to 1924 in Germany.
-Béla Kiss, a Hungarian serial killer, who killed young women and tried pickling them in giant metal drums.
-Robert Hansen, who began killing prostitutes in Alaska around 1980. He let them flee in the wilderness before hunting them down with a knife and rifle.
Learn about these and other serial killers. See what motivated them to lead such horrible lives and how they were finally brought to justice in Depravity: A Narrative of 16 Serial Killers.

Depravity: A Narrative of 16 Serial Killers

This title is due for release on November 7, 2012
We'll send you an email as soon as it is available!