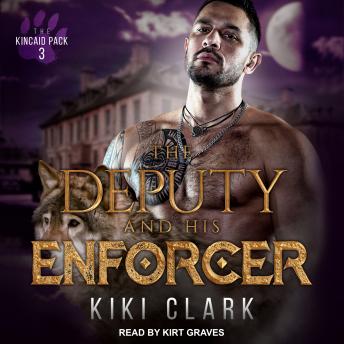 The Deputy and His Enforcer

A deputy bent on finding the truth and the Enforcer whose job it is to stop him . . .

Nothing is more important to Marcus Rivera than protecting his pack, so he doesn't understand why he has the sudden urge to tell a nosy human deputy things he shouldn't. Marcus follows the rules. Always. But something about Robson's scent has him tempted to break them.

The gorgeous red-head Deputy Robson Medina has been following has a secret. He just knows it, and he won't stop looking until he finds out everything he can about the alluring man. Even if the idea of Marcus being a criminal seems less and less likely the more Robson learns.

As the tension between them continues to grow, it stokes a fire inside Marcus he's never felt before. One that's driving him to trust his wolf's instincts and release the stranglehold Marcus has always had on his control. But when Robson gets a painful glimpse of the magical world Marcus lives in, they have to decide how much they're willing to risk to have it all.

I love this series so much and Kirt Graves does such an amazing job bringing all of these characters to life! These two are from two different worlds and aren’t supposed to mix but Marcus is having a difficult time remembering that. Our deputy just wants to find out the truth but he is about to lean to be careful what you wish for! A must read/listen. This whole series is amazing.

I loved this book when I first read it a a standalone, and now that I've been catching up on the entire series it was even more exciting to listen to Marcus and Robson's sweet romance. The overall storyline was as engaging as always, and I thought Kirt Graves once again did a fantastic job with the narration. I thought the pacing of Robson's investigation was nicely balanced, with him uncovering just enough of the truth to keep the story going without dumping an overload of information on him all at once. Marcus's character arc was much softer and sweeter, focusing more on overcoming his emotional issues and accepting Robson as his mate. I've always loved the concept of mates decided by fate, and in this story I thought it was very believable. Marcus and Robson experienced an immediate attraction to each other, but they still had to overcome their own emotions and biases to make things work for real. I never felt like these men were coerced into being together--there was no ticking timer or haze of arousal that forced them into moving too fast. Sure, Marcus's expectations of a mated relationship looked a lot different than Robson's, but the two of them talked it out instead of throwing themselves into something they didn't fully understand. Because Robson was so new to the shifter world, all the steamy moments happened towards the end of this book. That's not to say that the sexual attraction between these two wasn't simmering throughout the entire story, because it definitely was, but I had to wait ages to see Robson and Marcus explore their fiery chemistry in bed. To say that it was worth the wait is a significant understatement--I almost can't believe how insanely intimate and arousing their bedroom activities were. While this romance had a definitive happily-ever-after, the bigger Kinkaid pack storyline is ongoing. I'm really excited to see what happens next in this universe, and it's going to be hard to wait patiently to find out more about the threat to the Kinkaids.

Enjoy star crossed lovers? This book is for you! Two guys from two totally different worlds had sparks flying and heat building. I love the way Clark marries the shifter and human worlds so organically. The narration of the whole series has been fantastic and The Deputy and His Enforcer is the same high level of quality. I particularly enjoyed how Marcus was revealed with all his complexity.