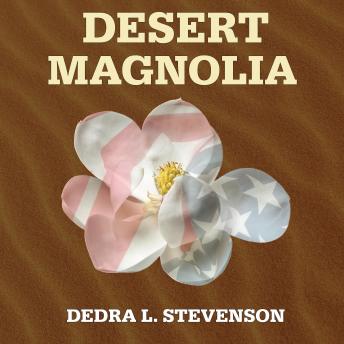 In Dedra L. Stevenson's first work of crime and courtroom drama, Desert Magnolia takes the reader along a turbulent journey with Daniella Pierce, a small town Southern gal who ended up living as a Muslim in Dubai, happy and fulfilled, or at least she thought. Daniella, upon hearing that her father has been murdered as a result of a hate crime, learns that her beloved cousin has been accused and will stand trial for his life.

Daniella comes back to her original home only to be immersed in a full blown Southern mystery, taking her on an emotional journey that proves to be not only therapeutic, but freeing for many skeletons, both real and supernatural. Armed with her quest for the truth and many stops for iced tea and good down home Southern cooking, Daniella doesn't give up on her cousin, even though he has left a trail of broken hearts along the way.

As the two had grown up together, Daniella and Leo always felt like brother and sister, both enduring the home environment of the mighty Ross Pierce, the Second. Ross Pierce was a wealthy businessman and well respected among his peers, but becoming that powerful in a small Southern town means that you will develop enemies along the way. The question is, which one hated him enough to kill him in such a horrific way?

Daniella struggles to unravel the mystery in time to save her cousin, but also faces the racial tension that she left behind when she married an Arab and became a Muslim. With the help and support of a handful of her relatives and her dearest friends, Daniella takes the necessary steps to end the tension once and for all.