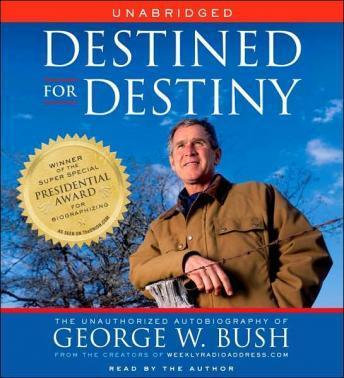 In Destined for Destiny, George W. Bush offers listeners an intimate, plainspoken, and often endurable look at the character-shaping achievements that led to his inevitable rise to the office of President of the United States.

Speaking from the heart, not from the brain, this legendary Commander in Chief takes us on a journey through his momentous life, including his hardscrabble beginnings as the child of West Texas oil millionaires, the remarkable academic performance that earned him entry into the finest East Coast schools, and his proud service to the country as an occasional member of the National Guard some time around 1972 or 1973.

The great man we meet here displays his mother's steely resolve and vindictive temper, his father's keen mastery of language, and his own unique gift of deciding.

His gripping life story deepens when a faith in God hits him one day 'like a bottle of Jack on an empty stomach,' and he has an encounter with the Prince of Peace that sets George W. Bush on a path to become the greatest war President in modern history.