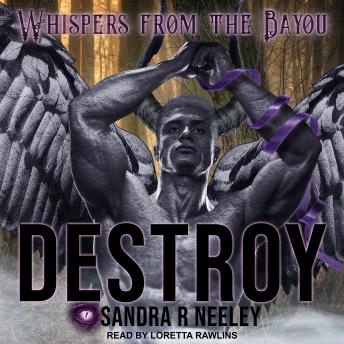 Destroy is beautiful, strong, charismatic, and charming. He is also selfish, shallow, petty, and jealous-or is he? One misunderstanding centuries ago resulted in his being labeled as not good enough, untrustworthy, self-serving. To hell with them, he knew who he really was! A strong, dependable, good male of strong character who was very pleasant to be around and even more pleasant to look at. If only he had a female or even friends to notice those things. He'd been alone for so long the bitterness had begun to seep in. Why did no one give him the credit he deserved? Why could no one see him, the real him? Other males had friends, other males had found their females-why not him? It was maddening to watch it and not be able to experience it. Then suddenly, out of the blue, there she was-all he had to do was be himself, allow her to see his magnificence and convince her that she's not evil. Her gifts are of no consequence to him. Yes, he feels her gift-her radiance, the light pouring from her. But that's not why he's drawn to her. It's because she's his, his very heart, his soul. Now if he can manage to keep her alive long enough to love him back, while he's also trying to prove that he's a male of value to his community, he may have a shot at this mate thing.