The Destruction of Civilization about 10,500 B.C. 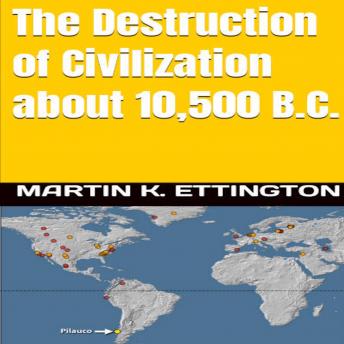 There is much of human history which we don’t know due to lost records, the oceans covering our ancestor’s cities, natural disasters, and reasons we don’t know.

There are also many anomalies which have been found showing ruins and objects from the far past which should not exist.

Some of the Historical Facts this book is based on:

The Younger Dryas Period in History was between roughly 12,900 and 11,600 years ago according to paleontologists and archeologists. Many researchers think this period of climate change resulted from comets hitting the Earth at this time.

The Vulture Stone at Gobekli Tepe which some scientists have interpreted as having a record of comets hitting the Earth about 11,000 B.C.

My study on ancient history has led me to write a number of books on the topic which can be found on my website at this link: https://mkettingtonbooks.com/ancient-history.html

The above facts and all of my research has led me to conclude that there were ancient world spanning civilizations which existed and were destroyed on the Earth in the 9,000 B.C. to 11,000 B.C period. There may have been earlier civilizations too, but the focus of this book is on that time period.

The following chapters review some of the evidence of these ancient civilizations which existed at these same very ancient times.

Destruction of Civilization about 10,500 B.C.

This title is due for release on August 26, 2021
We'll send you an email as soon as it is available!