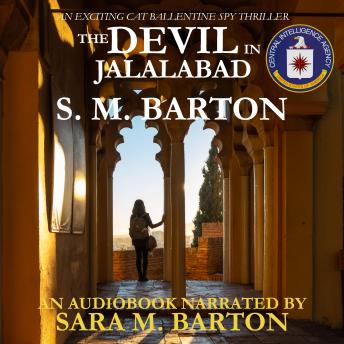 The Devil in Jalalabad: A Cat Ballentine Spy Thriller

#1 of A Cat Ballentine Spy Thriller

Sara M. Barton
A free trial credit cannot be used on this title

A gripping, suspenseful thriller that will keep you guessing till the end!....When CIA officer Catherine Ballentine was taken captive in Afghanistan, she endured horrific treatment for months at the hands of an Islamic State terrorist, Walid, but she never gave up on the mission. When the Afghan women and children she was working with were massacred, Cat escaped and brought the answers back with her. There's only one problem. She doesn't realize just how dangerous those high-stakes secrets are!

Extracted from that nightmare by a Navy SEAL team, she is sent to Dubrovnik for debriefing. Shortly after a series of interviews, three CIA officers go missing, apparent victims of yet another massacre. Why is Cat the only survivor yet again? Was Cat turned by Walid or is she being set up?

The CIA needs to know, so Cat is sent to Dr. Mark Hudsucker, an agency psychiatrist. When the shrink she calls Dr. Head Sucker insists on portraying Walid as a product of his unfortunate environment, Cat insists on giving him a blow-by-blow account of the devastating trauma she and the others endured at the Islamic State terrorist's hands. Is she so psychologically damaged that she's gone off the deep end or did Cat find a rat at the CIA?

As her world disintegrates, Cat meets an unlikely cohort. Navy SEAL Lorenzo Rossi is angry about what happened to his buddies who risked their lives that night to save her. That mission quickly went wrong and the SEAL team suffered heavy losses. Renny is determined to find answers about the events that unfolded in Jalalabad, especially when he realizes someone is trying to push Cat Ballentine into his life. But the untrusting female spy is tight-lipped and terrified. By the time they get to the Virgin Islands, all hell has broken loose. It’s a conspiracy conceived by a devil, fueled by an unspeakable evil that puts CIA personnel in grave danger. The electrifying climax will leave you breathless.

This title is due for release on November 26, 2018
We'll send you an email as soon as it is available!