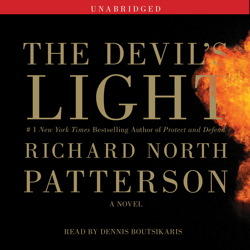 Now in a premium edition—a ripped-from-the-headlines thriller about an act of nuclear terrorism plotted by Al Qaeda, and the CIA officer who must find the weapon before it causes the Middle East to go up in flames.

THE DEVIL’S LIGHT tells the story of an AL Qeda operative named Amer Al Zaroor, who, on orders from Osama Bin Laden, directs the theft of a nuclear weapon from the Pakistani military, and then transports it toward its intended target, Israel. Meanwhile Bin Laden announces to the world that he will make a major terrorist strike on 9/11/10, the tenth anniversary of 9/11. Deep inside Washington, Brooke Chandler, a CIA operative whose cover was blown by an incompetent colleague in Lebanon, thinks he knows how the bomb is being moved toward its target and how to find it. First he must overcome the skepticism of the CIA and the White House, and then he must find the bomb and disable or detonate it before it causes the Middle East to go up in flames.