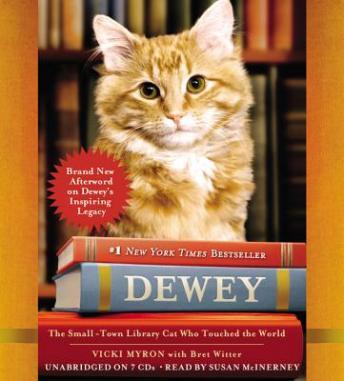 DEWEY is the heartwarming story of Dewey Readmore Books, the beloved library cat of Spencer, Iowa, as told by his owner and companion of nineteen years, Vicki Myron, the librarian who found him on a frigid January morning when he was abandoned as a kitten in the book drop slot. It is also the story of a remarkable small town, which burned down at the beginning of the Depression, only to rebuild itself, and which was almost shuttered during the farm crisis of the 1980s, before regrouping and rededicating itself to small town American values. Dewey's local charm and worldwide fame became a symbol of hope for this recovering town. Through Dewey's antics, we come to know and love many of the colorful and inspiring people of Spencer. But perhaps the most inspiring person in Spencer is Vicki Myron herself, a single mother who survived the bankruptcy of her family farm and working in a box factory to put two of her brothers through college to become one of the leaders of the Iowa library system. Dewey is one lovable, roguish cat who managed to transform an entire town and inspire people across the globe.