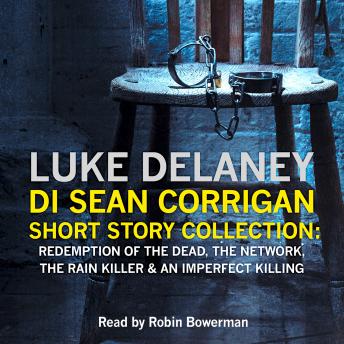 DI Sean Corrigan Short Story Collection: Redemption of the Dead, The Network, The Rain Killer and An Imperfect Killing

REDEMPTION OF THE DEAD

1993. The Parkside Rapist has been terrorising the women of South London, and Detective Chief Superintendent Charlie Bannan is in need of a secret weapon if he's going to catch this particular monster.

When fresh-faced PC Sean Corrigan is transferred to join the team, Bannan immediately spots his potential. Soon Sean will find himself exploring the scars his own dark past has left him in the race to help his new mentor catch their quarry before he goes on to commit more, and worse crimes...

Early in his career as a Detective, Corrigan is approached for an undercover assignment. He must take on the identity of a prison inmate and befriend a suspected paedophile, then infiltrate an early internet child abuse ring. Can he tap into his dark side for long enough to uncover the identities of the abusers without serious harm to himself?

Five women have been murdered. All prostitutes. All with dark, straight hair. Snatched from the shadows of London's red-light districts, their mutilated bodies left out in the pouring rain.

Enter DS Sean Corrigan. He's been drafted in to assist the Streatham Police Department - much to the displeasure of the existing DI. But Corrigan has no time for petty squabbles - he has one mission only: find the one they call 'The Reaper', even if it means entering the dark and twisted mind of a cold-hearted killer.

Sue Evans is a beautiful and successful TV presenter - that is until she's shot dead in the car park of her Southbank studios. DS Sean Corrigan and the Southwark Police Department are under pressure to solve the crime fast. Luckily they don't have far to look - turns out Sue Evans had a stalker and all the evidence points to him.

But Corrigan is not so sure - some things just aren't adding up. With everyone convinced it's case closed, he must take a risk to get to the truth. But can he be sure it'll pay off?

DI Sean Corrigan Short Story Collection: Redemption of the Dead, The Network, The Rain Killer and An Imperfect Killing

This title is due for release on May 26, 2016
We'll send you an email as soon as it is available!