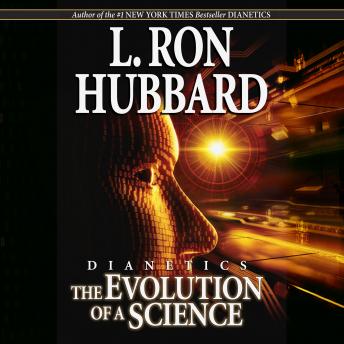 Dianetics: The Evolution of a Science

From the author of the #1 New York Times bestseller Dianetics: The Modern Science of Mental Health, with over 22 million copies sold

The hidden source of your worries, upsets and insecurity... REVEALED.

Written to coincide with the release of Dianetics: The Modern Science of Mental Health, this book was originally published as a book-length feature in a national magazine. The issue sold out within days, triggering thousands of letters and creating a storm of interest that grew into a worldwide phenomenon.

"The optimum computing machine is a subject which many of us have studied. It might be somewhat astonishing, at first, to conceive of such a computer. But the fact is, the machine is in existence. There are billions of them in use today and used in the past. In fact, you've got one. For we are dealing with the human mind." -L. Ron Hubbard


Discover your mind and how it works.

With over two hundred million copies of his works in circulation and dozens of international bestsellers, L. Ron Hubbard has inspired a movement spanning every continent on earth. All told, those works comprise some 5,000 writings and 3,000 recorded lectures and, as such, stand as the single most embracive statement on the human mind and spirit. His breakthroughs have helped millions lead more successful lives and achieve true happiness.

Dianetics: The Evolution of a Science