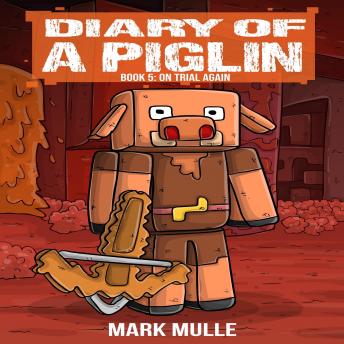 Diary of a Piglin Book 5: On Trial Again

The unimaginable happened. Calvin Pignes, the new Detective of Crimson City had to arrest one of his closest friends for allegedly conspiring with the Triad Bastion.

Evidence found in the bastion’s ruins points to Calvin’s friend but his friend denies the allegation and says there must be some kind of a mistake.

It is up to Calvin to solve this new mystery. How can he prove his friend’s innocence? Or will his investigation prove that what he thought to be his ally is not really innocent after all?

This unofficial Minecraft audiobook is not authorized, endorsed or sponsored by Microsoft Corp., Mojang AB, Notch Development AB or any other person or entity owning or controlling the rights of the Minecraft name, trademark or copyrights. All characters, names, places and other aspects of the game described herein are trademarked and owned by their respective owners. Minecraft®/ /TM & ©2009-2016 Mojang/Notch.