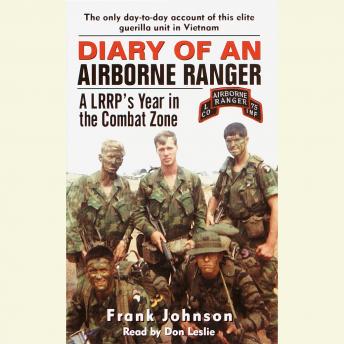 Diary of an Airborne Ranger: A LRRP's Year in the Combat Zone

Perhaps the most accurate story of LRRPs at war
ever to appear in print!

When Frank Johnson arrived in Vietnam in 1969, he was nineteen, a young soldier untested in combat like thousands of others--but with two important differences: Johnson volunteered for the elite L Company Rangers of the 101st Airborne Division, a long range reconnaissance patrol (LRRP) unit, and he kept a secret diary, a practice forbidden by the military to protect the security of LRRP operations.

Now, more than three decades later, those hastily written pages offer a rare look at the daily operations of one of the most courageous units that waged war in Vietnam. Johnson served in I Corps, in northern Vietnam, where combat was furious and the events he recounts emerge, stark and compelling: walking point in the A Shau Valley, braving enemy fire to rescue a downed comrade, surviving days and nights of relentless tension that suddenly exploded in the blinding fury of an NVA attack.

Undimmed and unmuddied by the passing of years, Johnson's account is unique in the annals of Vietnam literature. Moreover, it is a timeless testimony to the sacrifice and heroism of the LRRPs who dared to risk it all.

This title is due for release on April 3, 2001
We'll send you an email as soon as it is available!