Dick Barton The Mystery Of The Missing Formula 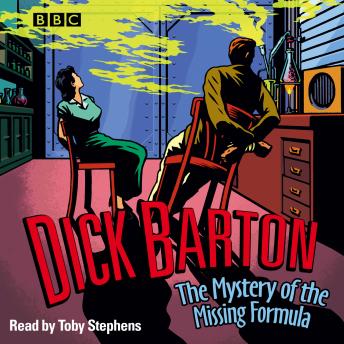 Where has George Cameron disappeared to? What deadly formula has he discovered? Why is his daughter Lucy in such terrible danger? And why was the meek chemist Tibbs so ruthlessly killed? The fate of the country lies in the hands of one man... Dick Barton – Special Agent! Captain Richard Barton, late of the Commandos, made his radio debut on the ‘Light Programme’ in 1946 and quickly went on to become Britain’s most popular hero. For years the nation tuned in to hear the famous signature tune, Devil’s Gallop, herald another cliff-hanging adventure for the smooth, crime-busting Barton and his friends Snowey and Jock. The radio serials proved so popular that a series of novels were written featuring Dick Barton. In this one, read by Toby Stephens, a vanishing scientist heralds the start of a complex and dangerous case.

Dick Barton The Mystery Of The Missing Formula