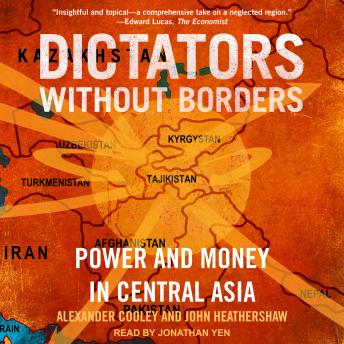 Dictators Without Borders: Power and Money in Central Asia

Weak, corrupt, and politically unstable, the former Soviet republics of Kazakhstan, Kyrgyzstan, Tajikistan, and Uzbekistan are dismissed as isolated and irrelevant to the outside world. But are they? This hard-hitting book argues that Central Asia is in reality a globalization leader with more extensive involvement in economics, politics, and security dynamics beyond its borders than any other world region. Yet Central Asia's international activities are mostly hidden from view, with disturbing implications for world security.

Based on years of research and involvement in the region, Alexander Cooley and John Heathershaw reveal how business networks, elite bank accounts, overseas courts, third-party brokers, and Western lawyers connect Central Asia's supposedly isolated leaders with global power centers. The authors also uncover widespread Western participation in money laundering, bribery, foreign lobbying by autocratic governments, and the exploiting of legal loopholes within Central Asia. Riveting and important, this book exposes the global connections of a troubled region that must no longer be ignored.

Insightful, with many case studies on money laundering shemes, illicit business empires and their connection to offshore banking and collusion. A must read for anyone interested in contemporary Central Asia or the post-soviet condition. Far from capitalizing on the region's alleged peripherial status, the study emphazizes the interconnectedness of the political regimes, transnational finance and policy shaping or international governing bodies and law making. In a way, it's also entertaining. Yes, there's a lot on Gulnora Karimova and the likes, who amassed riches beyond what you could even fathom.