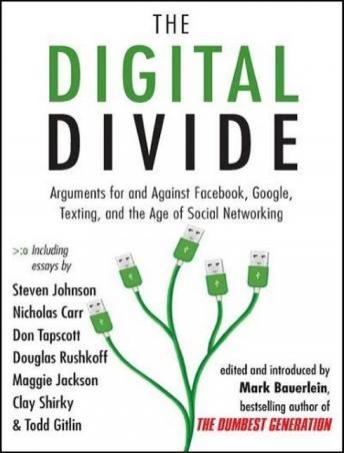 Twitter, Facebook, e-publishing, blogs, distance-learning and other social media raise some of the most divisive cultural questions of our time. Some see the technological breakthroughs we live with as hopeful and democratic new steps in education, information gathering, and human progress. But others are deeply concerned by the eroding of civility online, declining reading habits, withering attention spans, and the treacherous effects of 24/7 peer pressure on our young.

With The Dumbest Generation, Mark Bauerlein emerged as the foremost voice against the development of an overwhelming digital social culture. But The Digital Divide doesn't take sides. Framing the discussion so that leading voices from across the spectrum, supporters and detractors alike, have the opportunity to weigh in on the profound issues raised by the new media-from questions of reading skills and attention span, to cyber-bullying and the digital playground-Bauerlein's new book takes the debate to a higher ground.

The book includes essays by Steven Johnson, Nicholas Carr, Don Tapscott, Douglas Rushkoff, Maggie Jackson, Clay Shirky, Todd Gitlin, and many more. Though these pieces have been previously published, the organization of The Digital Divide gives them freshness and new relevancy, making them part of a single document listeners can use to truly get a handle on online privacy, the perils of a plugged-in childhood, and other technology-related hot topics.

Rather than dividing the book into 'pro' and 'con' sections, the essays are arranged by subject-'The Brain, the Senses,' 'Learning in and out of the Classroom,' 'Social and Personal Life,' 'The Millennials,' 'The Fate of Culture,' and 'The Human (and Political) Impact.' Bauerlein incorporates a short headnote and a capsule bio about each contributor, as well as relevant contextual information about the source of the selection.

Bauerlein also provides a new introduction that traces the development of the debate, from the initial Digital Age zeal, to a wave of skepticism, and to a third stage of reflection that wavers between criticism and endorsement.

Enthusiasm for the Digital Age has cooled with the passage of time and the piling up of real-life examples that prove the risks of an online-focused culture. However, there is still much debate, comprising thousands of commentaries and hundreds of books, about how these technologies are rewriting our futures. Now, with this timely and definitive volume, listeners can finally cut through the clamor, read the very best writings from each side of The Digital Divide, and make more informed decisions about the presence and place of technology in their lives.