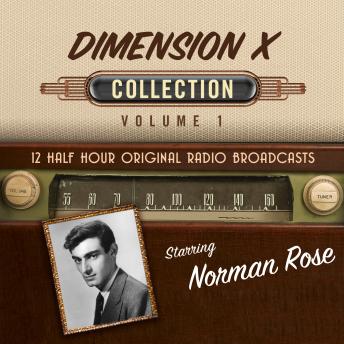 Hosted by Norman Rose, “Dimension X” was one of radio’s first adult science-fiction series and made its mark by adapting short stories by acknowledged masters in the field, including: Isaac Asimov, Robert Bloch, Ray Bradbury, Fredric Brown, Robert. A. Heinlein, Clifford D. Simak, Kurt Vonnegut, Jr., and William Tenn. Scriptwriters Ernest Kinoy and George Lefferts, who also contributed their own original scripts, adapted the stories. At the start of every broadcast, host Norman Rose promised us adventures in time and space, told in future tense! You knew you were about to be transported from your everyday existence to somewhere completely different…maybe even a distant planet. Radio was a fertile medium for science fiction. It was easy to visit other planets, interact with aliens, or fly in a rocket ship simply by using your imagination. “Dimension X” debuted April 8th, 1950, and completed its run September 29th, 1951, including a 5-month hiatus in the middle.
4-22-50 Report on the Barnhouse Effect
4-29-50 No Contact
5-6-50 Knock
5-13-50 Almost Human
5-20-50 The Lost Race
6-3-50 The Embassy
6-10-50 The Green Hills of Earth
7-1-50 A Logic Named Joe
7-21-50 Beyond Infinity
6-17-51 A Pebble in the Sky
6-24-51 Child’s Play
9-29-51 Nightfall