Dirk Gently The Long Dark Tea-Time Of The Soul 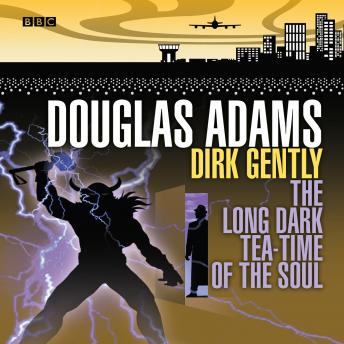 Harry Enfield exuberantly returns as Dirk Gently, who, fallen on hard times and dressed as a gypsy woman, is using his irritatingly accurate clairvoyant powers to read palms. He is saved when a frantic client turns up with a ludicrous story about being stalked by a goblin waving a contract accompanied by a hairy, green-eyed, scythe-wielding monster. When Detective Superintendent Gilks decides a headless body found in a sealed room is the result of a particularly irritating suicide, Dirk is plunged into a mystery where the interconnectedness of all things is tested to the limit... This is the second of three series adapted from the 'Dirk Gently' books, directed by Dirk Maggs (chosen by Douglas Adams to conclude the award-winning Hitchhiker's Guide To The Galaxy). Guest stars include Peter Davison, Jan Ravens, Philip Jackson, John Fortune, Morwenna Banks and Stephen Moore, as well as returning cast members Olivia Colman, Jim Carter and Billy Boyd. This release contains over thirty minutes of additional unbroadcast material.

Dirk Gently The Long Dark Tea-Time Of The Soul