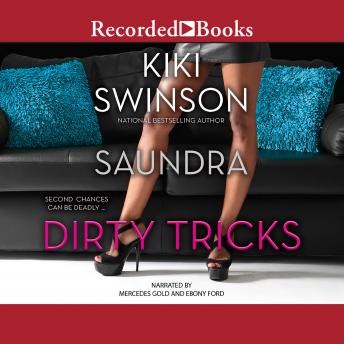 STAY SCHEMING KIKI SWINSON Karlie Houston is broke, betrayed-and running from a bounty on her head. Turns out the real owners of the payday loan office she ripped off weren't cool with her idea of employment bennies. With her lover and friends gone, she's forced to take refuge with her cold-hearted grandmother. But with enemies closing in, Karlie's last chance to flip a killer script is ticking down to slim, none-and dead. WHO CAN YOU TRUST? SAUNDRA Struggling bank teller Porsha has no time for Cinderella fantasies. She's working overtime to keep her tragedy-struck family off the streets. But her new boyfriend, Game, is smart, seductive-and sure-thing successful. So why not work his rock-solid plan to steal from her bank? All she's got to lose is more than she can possibly imagine. Author bios: KIKI SWINSON is the national bestselling author of over 30 novels and short stories. A star of the street lit genre-crime novels in an urban setting-Swinson's works feature resilient women making tough, and sometimes not quite legal, decisions to survive. Her novels, inspired by her experiences and a five-year stint in federal prison, have sold over 1 million copies. She completed her first novel while incarcerated and her second novel, Wifey, became the first book in one of today's best-selling street lit series. A native of Portsmouth, Virginia, and a former hustler's wife, Swinson resides in Virginia Beach, Virginia. Visit her online at KikiSwinson.net. SAUNDRA grew up in Cleveland, Mississippi, and now resides in Indiana with her husband and children. She started writing screenplays at the age of twelve and as an adult her need to create intensified. Saundra self-published her first novella, Owning Up, before being discovered by Delphine Publications. She is currently working on her next project. Visit her website at AuthorSaundra.com, or connect with her on Instagram, Facebook, and Twitter @AuthorSaundra. Author Residence: Kiki Swinson: Virginia Beach, VA; Saundra: Fort Wayne, IN